A group of 22 Cornell graduate students in architecture embarked on a trip to Colombia in late September to study the city of Bogota’s natural boundary with adjacent mountains and suggest sustainable solutions for the urban communities along that boundary. Led by Jeremy Foster, associate professor of architecture, and visiting critic Julian Palacio, the trip was part of the fall 2016 expanded practice studio Bogotá’s Los Cerros Orientales: Constructing a Sustainable Relationship Between City and Nature. 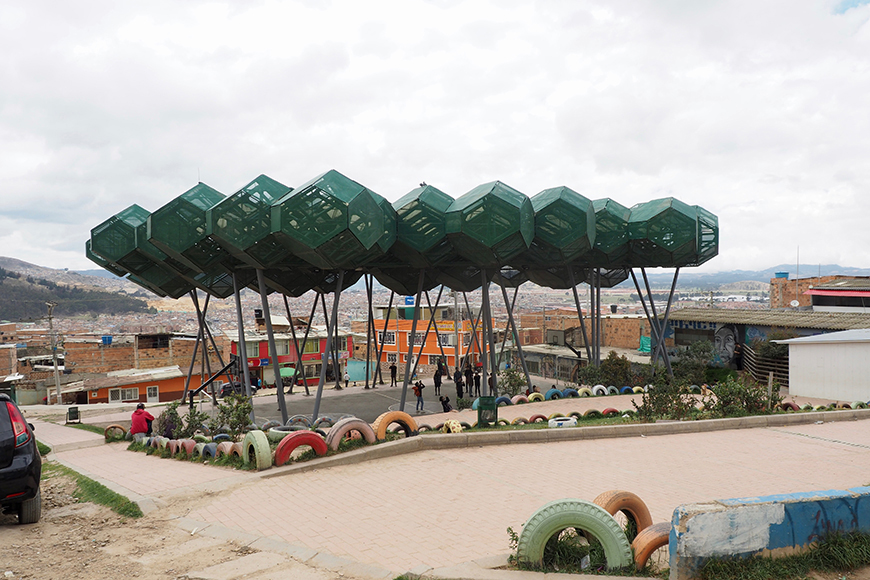 The one-week field trip focused on the area known as Cerros Orientales, the urban edge at the mountains east of the city and a natural boundary to Bogotá’s development.

After decades of conflict in rural areas that dramatically increased migration to the city, Bogotá has a large number of inhabitants living in informal conditions.

“The challenges created by this migration are especially evident in the Cerros because they are so close to the city’s historic center,” Foster said.

Armed with geodata provided by an environmental advocate in Bogotá, the students were assigned project areas within the city-Cerros boundary and challenged to develop strategic visions for their sites.

Their project looks at the community of El Paraiso, linked to the university neighborhoods via a hiking trail that is underused due to steep slopes. “Our proposal centers on using that trail as an armature for urban agriculture and additional community space,” Nissen said.

Brian Havener, M.Arch. ’19, Ethan Davis, M.Arch. ’18, and Justin Hazelwood, M.Arch. ’18, focused on the barrio of Aguas Claras, a settlement hidden in a valley of the Cerros. They proposed “various surgical interventions of the landscape, to create a framework for further development … that could be replicated in other communities of Bogotá,” Havener said.

“It’s one thing to understand a city through research and mapping, but it’s truly inspiring when you get to experience that place and see so much change as it is happening,” he said.

Davis shared this view, and appreciated seeing the value of the informal settlements, such as Aguas Claras, as assets to the city.

“A successful site visit is one where your preconceived notions of a place are challenged or completely upended,” he said. “This in-between zone serves as a soft urban buffer, which mediates the city’s interaction with the mountain, contains urban expansion into natural reserves and provides a space for ecological succession.”

For Foster, the most interesting aspect of the experience was the current “political moment” in Colombia, and how it affects the way planning and design of the city are discussed and contested. He realized on visiting Bogotá that the Cerros, seen by most visitors as simply a “beautiful backdrop” to the city, are actually a long-disturbed landscape – which, thanks to recent history, is unknown and even feared by many Bogotanos.

“To give this green open space a future, designers and planners also need come to grips with this fear and cultivate a sense of environmental citizenship toward the mountain,” he said. “This gives students lots of things to consider.”

In addition to site study and documentation, the students met with architects and university professors in Bogotá, attended lectures and toured historic neighborhoods.

“This interaction with local experts and residents was very productive,” Palacio said, “and gave the students the opportunity to have an idea about how these different stakeholders understand Bogotá’s relationship with the natural backdrop of the Andes.”

Spending the final three days of the trip in Medellín, the group met with city planning officials, architects and university faculty, and visited built projects that “embodied ideas about the transformative role of architecture in the revitalization of different areas of the city,” Palacio said.

The visit to Medellín provided Davis with a lasting memory. “We struck up a game of soccer with a group of kids while on a tour of one of the informal settlements. The sun was going down and our bus was ready to leave, but our professors, along with residents of the neighborhood, gathered around to watch the group of graduate students get outplayed by 12-year-olds.”

In this volunteer capacity, Campanella will conduct independent research on the development of the city’s parks and will assist Jonathan Kuhn, the parks department’s director of art and antiquities, with strategic research projects related to parklands history.

A team of graduate and undergraduate students will assist Campanella with a project to research, write and update brief narratives on the design history and cultural significance of several hundred parks, playgrounds and natural areas throughout the city. The narratives will be used for on-site historical markers and the parks department website, and will be compiled in an official publication co-edited by Kuhn and Campanella, “A Field Guide to the Parklands of New York City.”

Campanella is a Brooklyn native who divides his time between Ithaca and Brooklyn’s Marine Park neighborhood, where he grew up. His writings for popular and scholarly publications include essays in The Wall Street Journal on the 1964 World’s Fair Unisphere and how the London plane became Gotham’s iconic tree, and an article on Marine Park’s design history for the Journal of the Society of Architectural Historians. He is the author of three books including “Republic of Shade: New England and the American Elm” (2003) and has received Guggenheim, Fulbright and Rome Prize fellowships.

He is working on a book about the evolution of his native borough, “Brooklyn: A Secret History,” as well as a study of influential landscape architects Gilmore D. Clarke, Class of 1913, and Michael Rapuano ’27, whose firm, founded in 1934, designed many of New York’s parks and parkways in association with master builder Robert Moses. Clarke (1892-1982) was a Cornell professor of architecture from 1935 to 1950, and dean of the College of Architecture from 1939 to 1950.