Search for: Women in Architecture

The Clemson University College of Architecture, Arts and Humanities’ School of Architecture will host the first-ever “Women in Architecture” lecture series this fall with five notable women in the industry. Co-sponsored by the Clemson Architectural Foundation and AIA Charleston, the series kicks off Monday and runs through Oct. 23. There will be four lectures held in Clemson and two in Charleston.

Architecture tends to be a male-dominated industry and it is a goal of ours to showcase the diversity that exists within the field,” said Andreea Mihalache, assistant architecture professor. “So when we met to plan this year’s series, I saw an opportunity for us to create a dialogue around women in architecture and the impact they’ve had.”

“These speakers have personally faced challenges but have worked to pave the way for female professionals,” said Mihalache.

Mihalache is also the faculty adviser for Clemson’s Women in Architecture Students chapter. Founded to support women in architecture and design, the student organization seeks to further facilitate diversity discussions about the field and aid in student and professional development through educational opportunities and networking.

Lectures are free and open to the public. The date, time and location for each event follows below:

This year’s event revolved around the theme of diversity in architectural education. Three panelists—all leaders in academia and founders of their own practices—discussed the challenges women architects continue to face, both in school and in the working world, as well as strategies to promote young female architects.

Deborah Berke, the first woman dean of Yale School of Architecture, Donna Robertson, former dean of the College of Architecture at the Illinois Institute of Technology and one of this year’s award recipients, and Winka Dubbeldam, chair and professor of graduate architecture at PennDesign at the University of Pennsylvania, participated in the conversation, moderated by RECORD editor-in-chief Cathleen McGuigan.

The panelists kicked off the discussion by citing female enrollment statistics and faculty positions at their respective institutions (“The numbers are not encouraging,” said Berke), and the ways in which they, as leaders in education, could enlist lasting change. 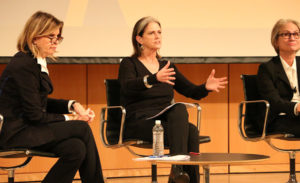 “I think that we could be more radical and change the perception of the practice of architecture. We need more multidisciplinary models,” said Berke. “Women need to be explicitly taught how to start businesses,” she added.

Dubbeldam noted, “As a university, it is important to support women in being more competitive and proactive in asking for things.”

The three women touched on range of topics, from the obstacles that confront working mothers, to the importance of women advocating for each another.