Designing for Space: From NASA to FIU

"Although it is an architecture class, students must apply to their designs computation, robotics, and biology to overcome the challenges of designing for space exploration."

Nasa Fellow Teaches Students How to Design for Outer Space

A new Architecture seminar, Space Fictions, offered at the Florida International University, places students within the framework of outer space, challenging them to design a habitat in space while considering practical issues like radiation and weightlessness. Their work is inspired by design fiction, a design method that uses narrative scenarios to envision, explain and raise questions about possible futures for design and society.

During the first part of the course in Fall 2015, students researched space architecture and design fictions. In Spring 2016, the same students are taking a design studio that focuses on work based on their previous research. The goal is for students to deliver design projects that lift the discourse of space architecture to a new level, “beyond the mercilessly practical,” says Professor Neil Leach, “into a realm of truly inspirational utopian dreaming.”

Zoe Russian Moreno, a senior architecture student in Space Fictions, took the class because of its innovative and unique curriculum. In their projects, the students’ designs must be integrated within a narrative and work with the story. Moreno says she enjoys most this narrative aspect of designing for outer space. “It’s like being the art director of a movie,” said Zoe. “Also, the idea of pushing sci-fi design into ‘reality’ makes me wonder how architecture can be ‘weird’ and unorthodox while still retaining some type of functional program.”

Third-year student Catherine Pageau said that she enjoys most how Leach exposes them to the interdisciplinary aspect of the class. She said that although it is an architecture class, students must apply to their designs computation, robotics, and biology to overcome the challenges of designing for space exploration.

For Pageau, enrolling in the class was a step in a different direction as an architect. “…[T]his was an opportunity to get out of my comfort zone and create a project within a very non-conventional context,” she said. “Without the constraints of real clients and the real world, this was the time to creatively explore different areas within and outside architecture.” 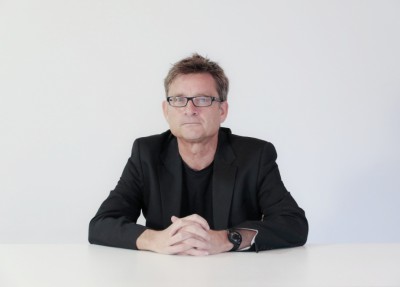 Neil Leach, an architect, interdisciplinary scholar and NASA Innovative Advanced Concepts Fellow. As a NASA fellow, Leach has worked on a robotic fabrication technology for 3D printing structures on the moon and Mars. In his own words from a chapter in Space Architecture: The New Frontier for Design Research, as a NASA fellow Leach has explored “the use of 3D-printed fabrication technologies that would allow habitats and infrastructure to be constructed by robots” at a certain location in space before humans even arrive at said location. This would “reduc[e] the risk of radiation exposure for construction workers,” said Leach.

In addition to being a NASA fellow and visiting professor at FIU Architecture, Leach is a translator of Medieval Latin (On The Art of Building in Ten Books), a visiting professor at Harvard GSD and Tongji University, a professor at the European Graduate School, and an academician of the Academia Europaea. The Academia Europaea is Europe’s most distinguished, invitation-only scholarly academy that boasts over 50 Nobel laureates among its members. Leach is one of only two architects to have been elected to the academy. Leach also holds a distinguished Chinese government ‘High End Foreign Expert’ visiting professorship at Tongji University. He has close ties with academicians in China and has served as director of the American Academy in China.

“At the beginning I was in awe and honestly intimidated by his accomplishments,” said Space Fictions student Zoe. “However, as time passed by and I got to work with him more, I realized that his knowledge helped me as a designer and architect. He made me realize what I truly wanted out of this career and what I could apply to it. He has truly become a mentor, and I am honored to work with him for my thesis.”