The CARAPACE PAVILION has been installed at Joshua Tree National Park.

The Carapace Pavilion is a project of the students and faculty of the University of Southern California School of Architecture. The project was supported by a generous grant from the PCI Foundation and was hosted during fabrication with considerable enthusiasm and support at the Clark Pacific precast facility. The project involved nearly 500 people and took almost four years from the initial sketches to the final installation. Hundreds of architecture students participated hands-on in the design and fabrication of the Carapace Pavilion, and each received tours of the precast facility with descriptions of the types of precast and the productions processes. With considerable help from the professionals at Clark Pacific, students and faculty participated in each step of the design and fabrication of the Carapace, from building the mold to the final installation.

The project was installed on June 20, 2022. A small group of volunteers arrived the day before to prepare the site. There was no construction yard allowed at Joshua Tree National Park, and installation time was limited to just one day. The Carapace was transported by Reeve Trucking on the two-hour trip form the precast yard to the site in the early morning. The large self-propelled Maxim crane and support truck arrived after dawn and completed the crane set-up prior to the arrival of the Carapace. To avoid damaging any potential native cultures artifacts, the site directly beneath the Carapace was raised approximately 14 inches by adding local fill dirt. Using a clever curved screed tool and curved side-rails, the volunteers dug out a double curved trench, matching the geometry of the foundation panel. The digging occurred only in the new raised soil that had been added to the site, and thus there was no foundations or trenching in the original undisturbed site conditions. The Carapace was quickly lifted from the truck and set onto the site with the help of rangers from the National Park Service, and several team members from Clark Pacific.

A time-lapse one-minute video of the last step of installation is on YouTube: https://www.youtube.com/watch?v=y-C4ntm9Gj0

Students prepared a software tool to help them design this unique geometry, which is made of ultra-high-performance-concrete (UHPC). The students knew they only had one mold to work with, but wanted to create five panels of three different types. The software tool enabled the students to design the roof, walls, and floor to all be cast in the same mold, even though the panels were quite different from each other. 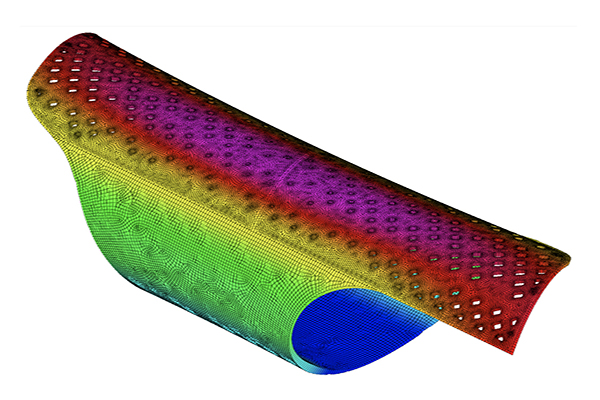 The mold was created by students from high density foam using their 3D computer design files and a CNC machine in the School of Architecture at the University of Southern California. The mold was composed of 16 foam panels. Each panel was about three feet wide and eight feet long. To create the deep arch of the mold, a plywood egg crate form was installed on the construction deck at Clark Pacific precast plant. This allowed the students to use relatively thin foam planks for the CNC step. High density foam is relatively expensive, and the egg crate strategy created substantial savings on the cost of the mold, while also reducing waste. The 16 panels were installed on the curved plywood egg crate mold, and then epoxy and fiberglass layers provided the smooth surface finish and hid the seams of the  panels. A gelcoat was added as a final coating, and students spent many hours standing the epoxy and gelcoat between coats. The final mold resembled something like a surfboard in its’ finished surface appearance. 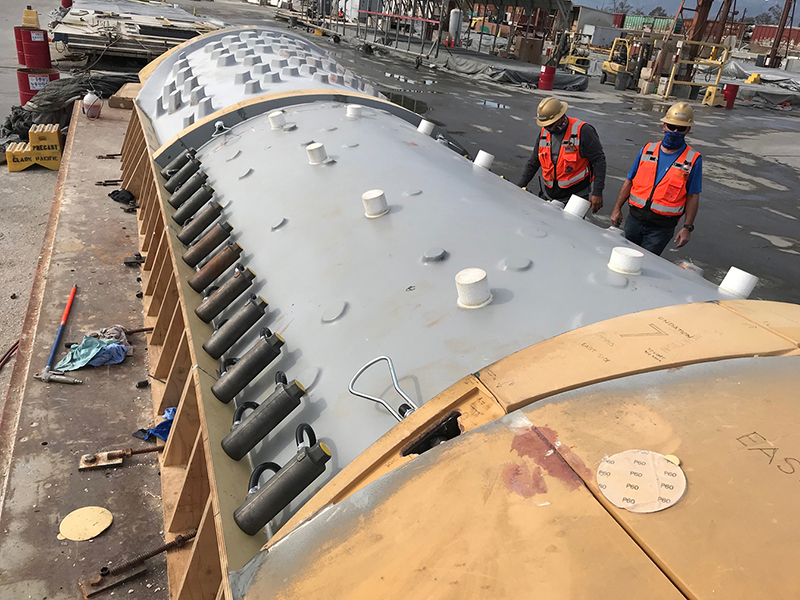 The project uses Lafarge Holcim Ductal ultra-high-performance-concrete (UHPC). UHPC is quite different from standard concrete in the way it flows as it is cast. This required the mold to have well-sealed sides and a backpan or top mold. The backpan resulted in the project being cast blind through a funnel on the top of the mold. It was not possible to see what was happening inside the mold as the concrete was being poured through the funnel. UHPC is an especially strong structural material. While typical concrete might range from 4,000 to 6,000psi in compressive strength, the UHPC in the Carapace Pavilion was engineered at 17,000psi and the 28-day test of sample cubes revealed that the actual strength of the concrete was more than 25,000psi. Each of the five cast panels weighs between 7,000 and 9,000 pounds. At the thinnest and most critical section, the wall panels and roof panels are only two inches thick. To obtain tensile strength, tiny steel fibers, each less than one inch long and much thinner than sewing needles, are included as the UHPC is mixed in the batch plant. Millions of these tiny steel fibers were integrated throughout the mix of each of the panels. These steel fibers eliminated the need for standard rebar. 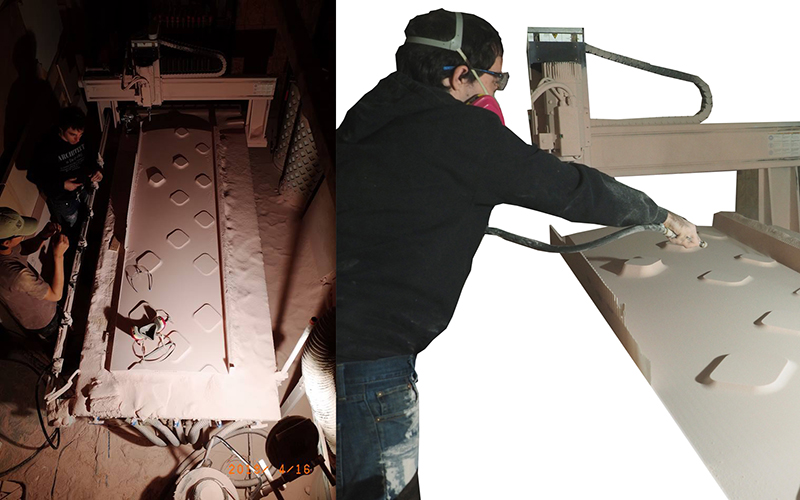 The foundation panel was cast first. This was done for two reasons. First, the foundation panel is the smallest and uses the least concrete. Secondly, the foundation panel was intended to be nearly completely buried under the dirt of the site, and thus any flaws resulting from a learning curve would be hidden. The down-facing concrete in the mold obtained an extremely smooth surface finish matching the smoothness of the completed mold. The down-facing surface composed the interior of the Pavilion. The upward facing part of each panel had a slightly more textured finish resulting from tiny air bubbles that rose through the UHPC. UHPC has critical guidelines on the use of vibration to help settle concrete into a mold. UHPC has an excellent ability to fill the mold, and extended vibration risks having the steel fiber settle towards the bottom of the panel rather than remaining dispersed in the material. After the panels were cast and extracted from the mold, students applied a skim coat to the outer surface of each of the finished panels.

The foundation panel is connected to the two wall panels using Lenton cups and high-strength grout. The wall panels are connected to the roof panels using JVI vector connectors. The JVI vector connectors are installed in a staggered configuration along the touching seams of each panel. The vector connectors are stainless steel, and the vectors are welded to each other to assemble the five panels. The project was fully assembled in the precast yard at Clark Pacific. Off-site prefabrication was critical to the project due to the limitations on site access and the extreme distance and harsh climate conditions of the project site. 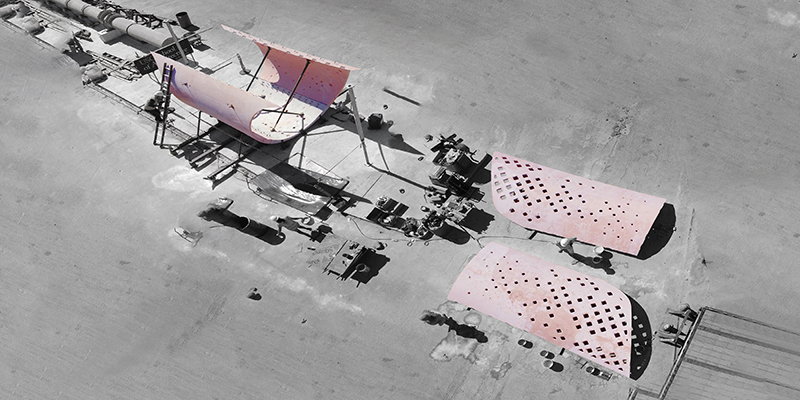 The design team knew about the dimensions and weight tolerances for trucking, and the project is designed to exactly fit standard wide-load dimensions. The completed project weighs about 40,000 pounds, and is 42 feet long at the roof. The Carapace tapers from the 42-foot roof to only 12 feet long at the foundation. The small foundation dimension reduces impact on the site and makes it easier to fit on the truck trailer. The extended roof cantilevers to provide an expansive shade area, but also contribute to a critical high center of gravity. The high center of gravity contributed to special trucking engineering to avoid the potential for rollover or lateral loading during turns or windy conditions.

With leadership from rangers of the National Park service, eight aluminum earth anchors were driven through the foundation panel to anchor the project to the site. Each earth anchor was just under four feet long, and each required a custom 5”x5” by half-inch-thick steel washer. After the earth anchors were installed, the group of volunteers back filled the interior of the Carapace Pavilion with local dirt, creating a natural dirt floor for the pavilion. 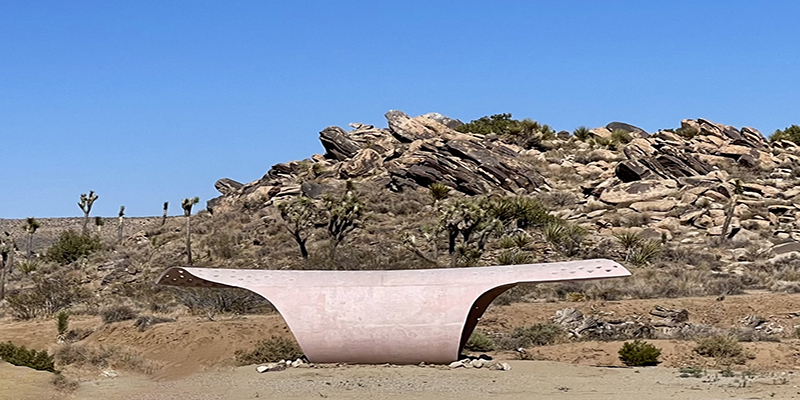 Eventually, native vegetation is expected to grow on the east and west sides of the Carapace, helping to integrate the pavilion into the natural landscape The Carapace points due north and south, and each end of the campus provides a framed view of Joshua Tree National Park. The north opening frames a long distance view across the desert floor at Queen Valley. The south end frames a local view of the large rock formations and natural landscape adjacent to the site. The National Park Service selected a site for the campus pavilion that will eventually become a VIP campground area. VIP means “Volunteers In Parks,” and describes groups of people who camp at the park and help the National Park Service with maintenance and improvements. At some point it is hoped that the site will also include a residential education facility that will allow high school and elementary school students to come to the park and spend three days and two nights in an exploratory science curriculum to learn about the park. The Park Service is in the early stages of schematic design for this residential facility that might host 120 students and 10 or 15 faculty members. The site location is well inside the wilderness area of the National Park, and there are no services at the site. There is no water, no electrical power, no waste, and no cellphone service. The site project cannot be seen from the main road as it is hidden behind a hill of boulders, thus creating a quiet and private location for the VIP campground.

The students and faculty of the School of Architecture at the University of Southern California are grateful to the PCI Foundation, PCI West, and the Precast / Prestressed Concrete Institute (PCI) for their enormous support. The project fabrications was hosted at Clark Pacific in Fontana, and received years of enthusiastic support and help from the gracious precast team at Clark Pacific. The Ductal ultra-high-performance-concrete (UHPC) was provided by Lafarge-Holcim. The engineers for the Carapace Pavilion were from Walter P. Moore. Crane services were provided by Maxim Crane. The project was transported to the site by Reeve Trucking. We are grateful for the support of JVI, INC. for the vector connectors and to Cresset Chemical Company for form release, The earth anchors were provided by American Earth Anchors, and the anchor washers were provided by Greg Swanson. Installation photography and video was by Mark Johnson, Art Brandt, and Joe Pingree. Nearly 500 people have worked on the project over the four years since the initial sketches were created in 2018. 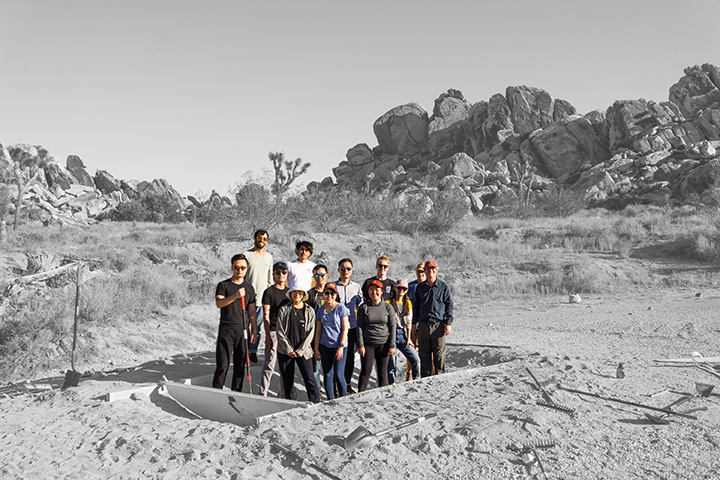