Developed by Daniele Profeta and Maya Alam, professors at Syracuse University and the University of Pennsylvania, ARCTIC LiDAR is an immersive 360° Video Installation exploring the quickly expanding logistic landscape of the Arctic coast.

The Makers is a series that highlights students and faculty from ACSA member schools to show the unique work coming out of architecture schools across the globe. Check out more on the blog by searching “The Makers.”

Logistics can be defined as the detailed coordination of the complex space constituted by infrastructures, information, goods, and people that make the production and circulation of stuff possible. Stretching across nation-state borders, redefining territoriality through the cartographic space of global supply chains and constructing an operational state of unencumbered continuous movement of goods, the space of logistics is dramatically transforming the world we inhabit.

Part documentary, part projective narrative, the video presented in this installation articulates projective scenarios for the expanding logistics space of global commerce along the coast of the Arctic. Using 3-D LiDAR scanning, this project captures the primary nodes of this far-reaching infrastructure, ranging from Dry Ports to Ice Breakers and Rail Terminals, and re-assembles them in a composite, speculative landscape.

LiDAR, an acronym for Light Detection and Ranging, is a remote sensing technology that uses light pulses to measure and three-dimensionally map vast territories with ever-increasing precision. A sensor emitting pulses of infrared light, millions of times per second, constructs point-clouds as a representation of the environment being surveyed: a spatial database so detailed that can be used to detect and interact with surrounding objects: across the territory of the Arctic, it is used to establish politics, protocols, and economies of autonomous distribution.

It is through the lens of the apparatus of machinic vision and its network of activations that we can begin to see the traces of this emerging urbanism of logistics across the territory. 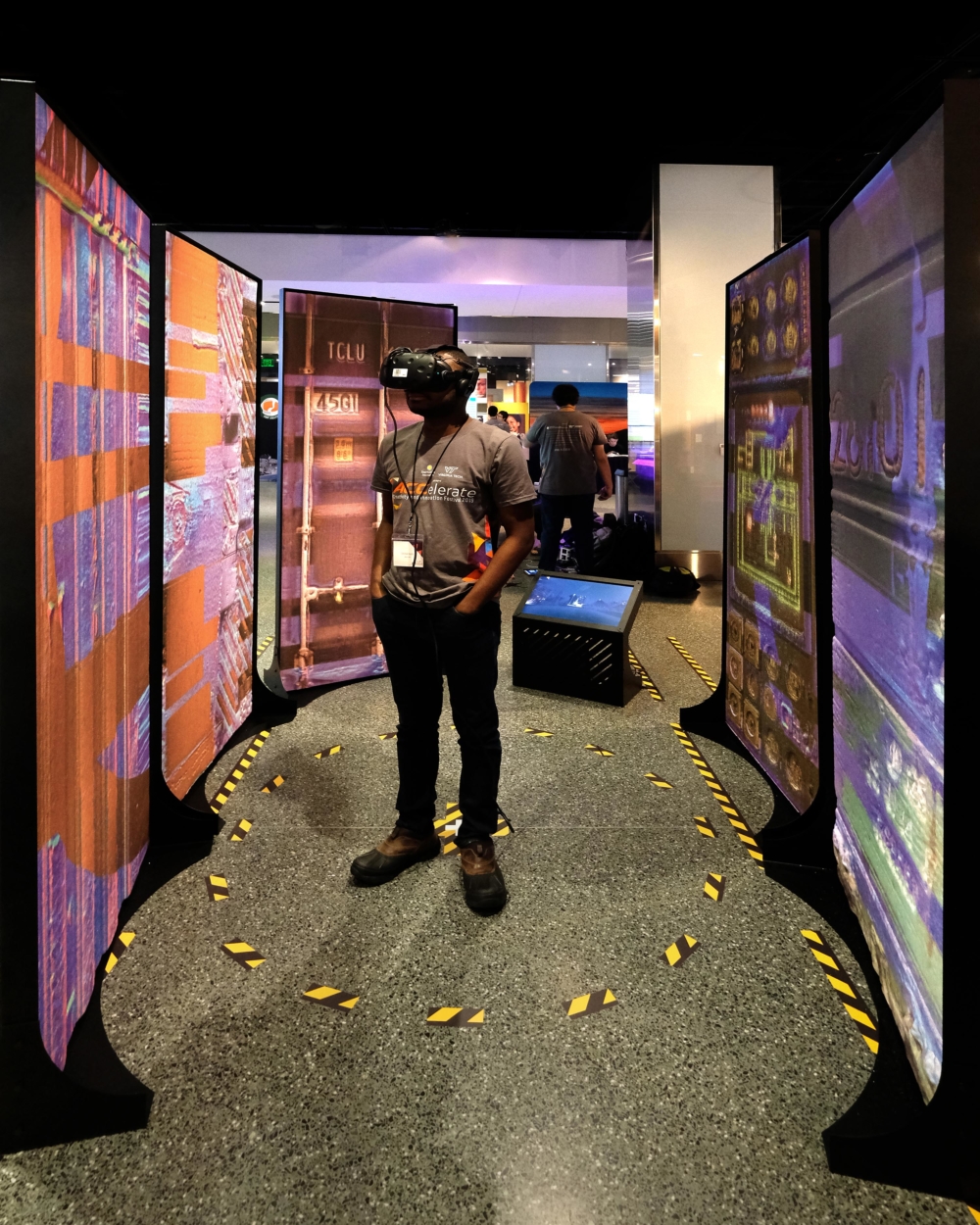 Photograph of the installation exhibited at the Smithsonian Institution Museum of American History during the 2019 ACCelerate Festival showing the relationship between VR headset experience and the physical installation. 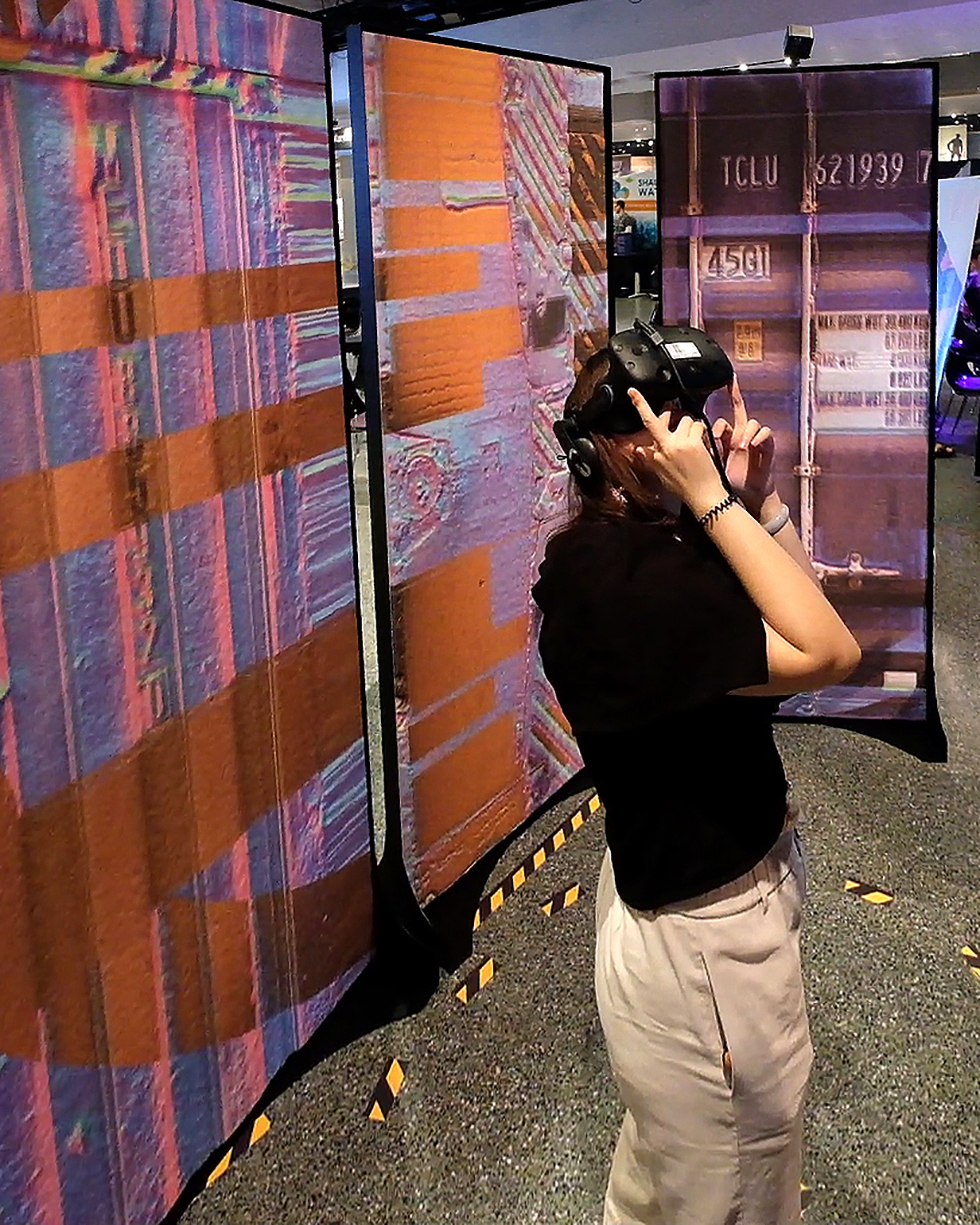 Photograph of the installation exhibited at the Smithsonian Institution Museum of American History during the 2019 ACCelerate Festival showing the relationship between VR headset experience and the physical installation.

Using a Virtual Reality headset, the viewers are transported in the automated landscape of logistics, where driverless trucks, robotic cranes and remote-sensing drones operate through the dense point cloud. Immersed in a 360° video moving across this speculative landscape, this operative mode of vision is slowly contaminated by atmospheric elements foreign to the machinic eye, prompting the viewer to develop an intimate engagement with the material. The viewers are caught in an ambiguous territory where a bodily experience of this harsh landscape and its extreme climate re-asserts its presence in an otherwise human-less environment. And yet, their point of view is constrained to the rigid linear movement of what appears to be indifferent machines, reinforcing the agency of the automated infrastructure upon the construction of this territory. 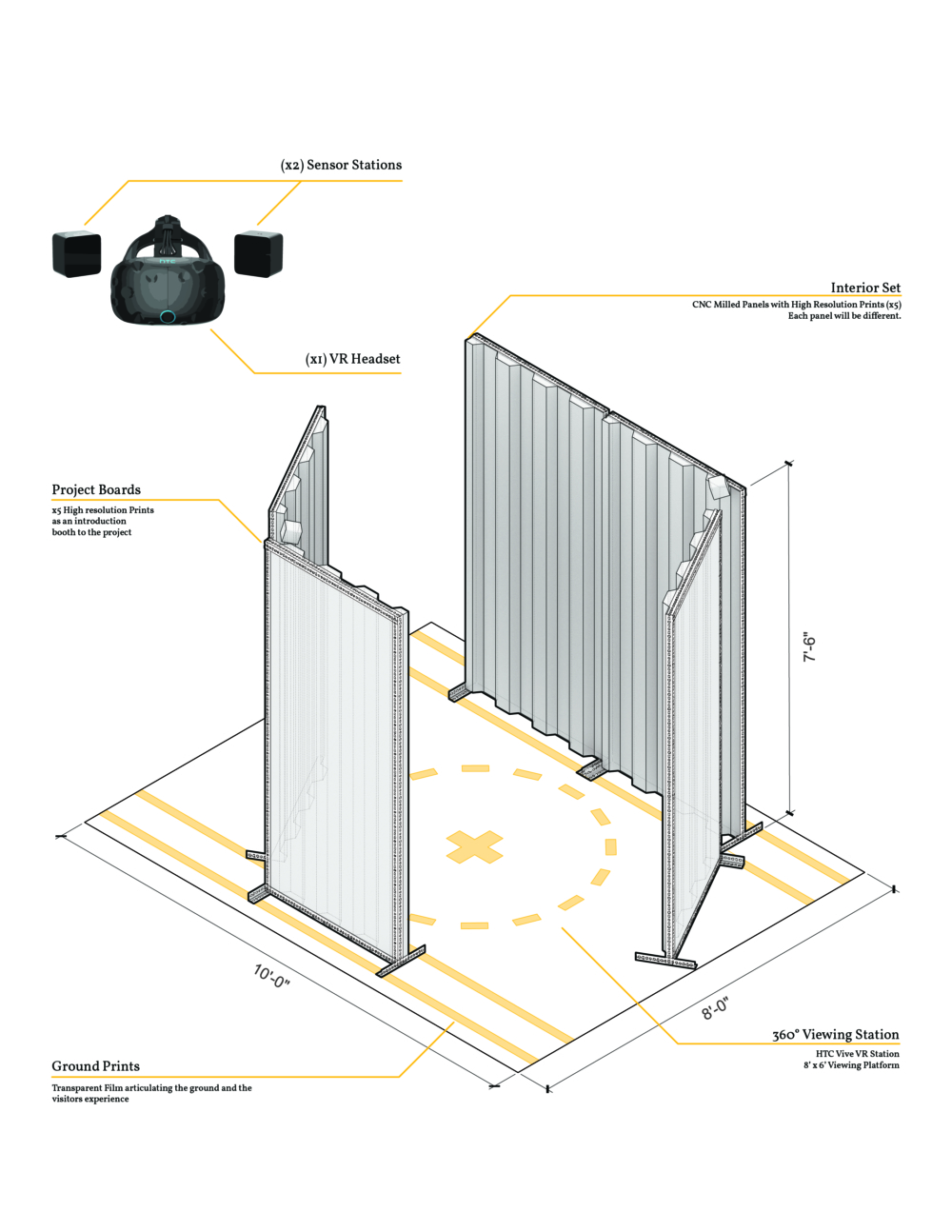 A drawing showing the overall setup of the installation. The (x5) panels, milled out of high-density foam, are held up by a metal frame, displaying additional information on its back. 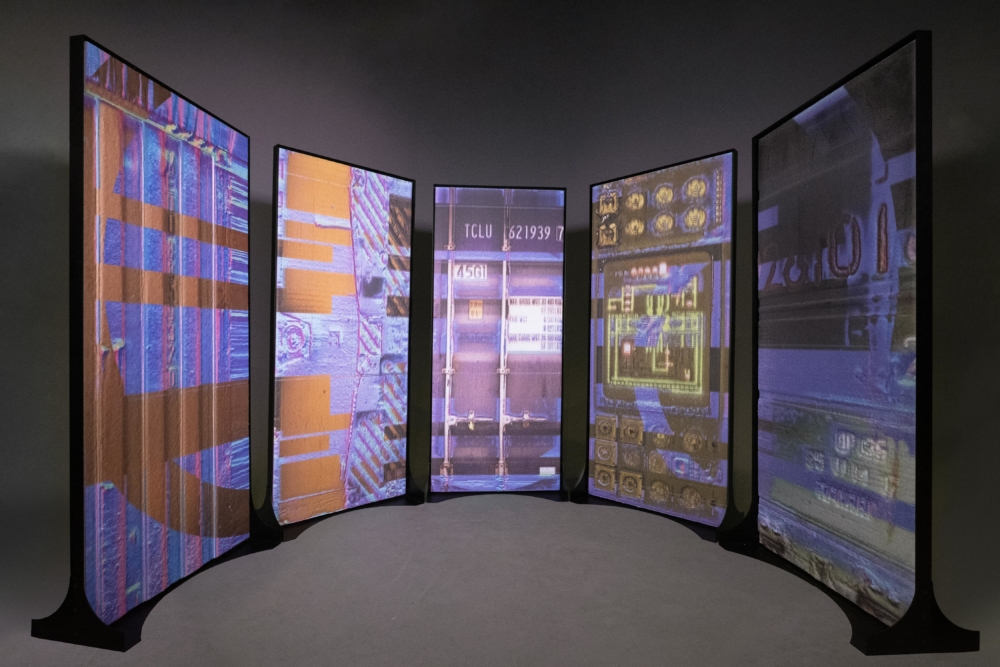 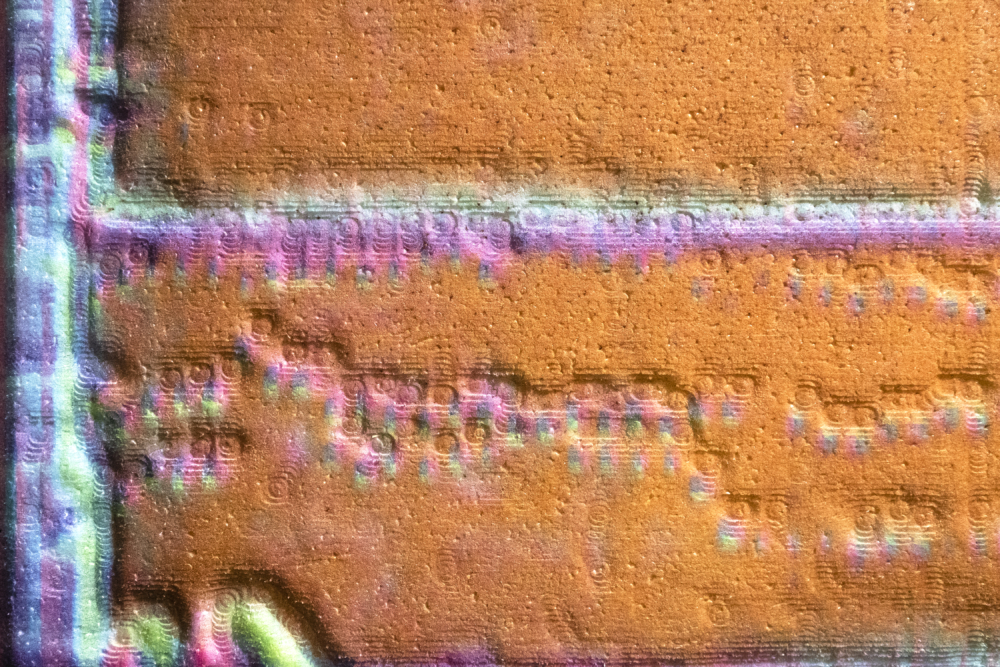 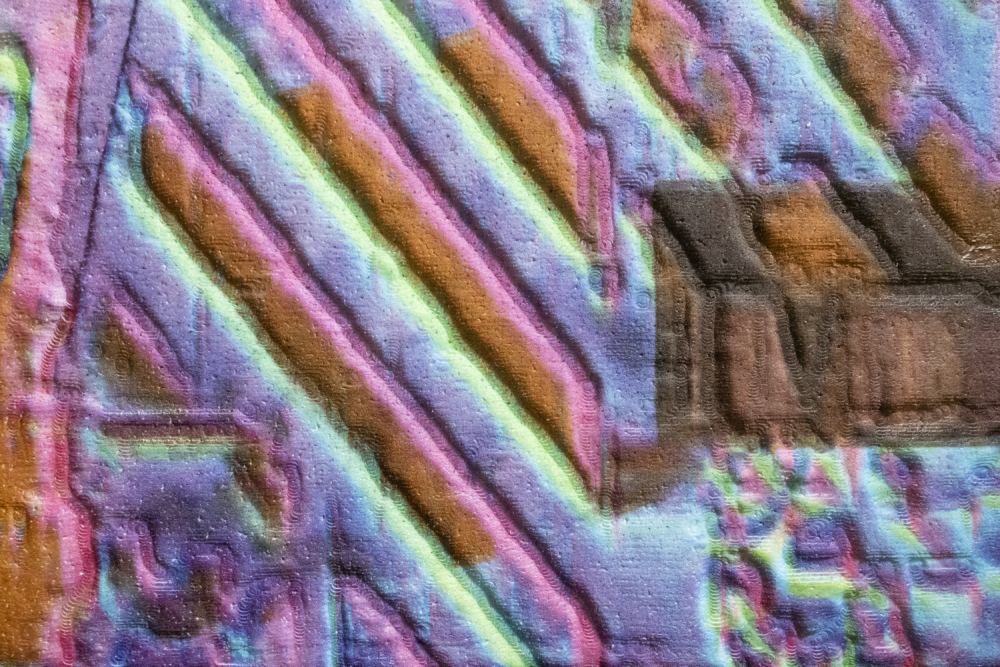 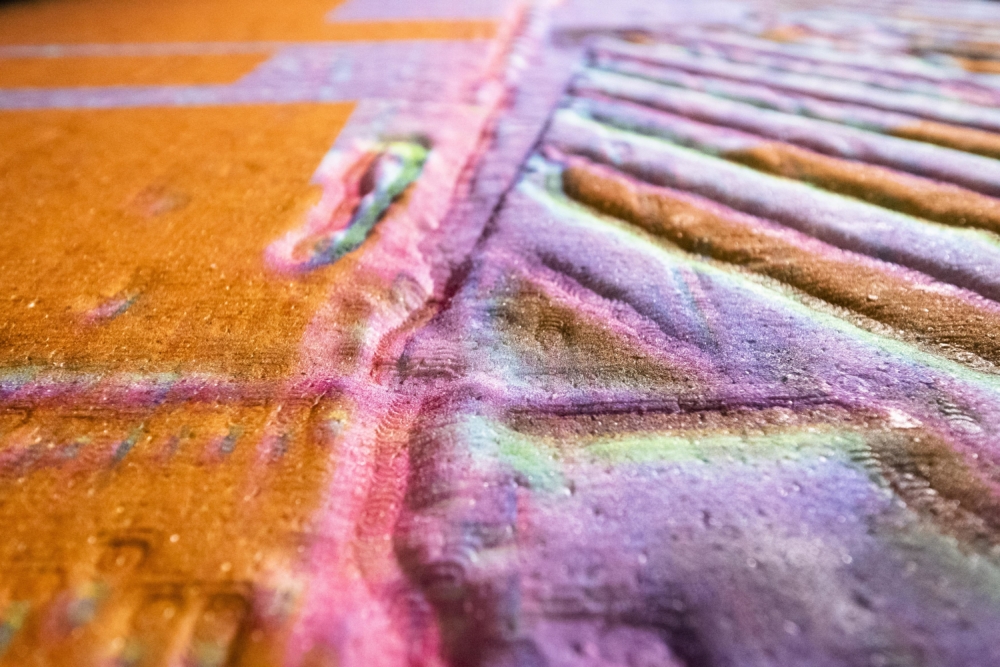 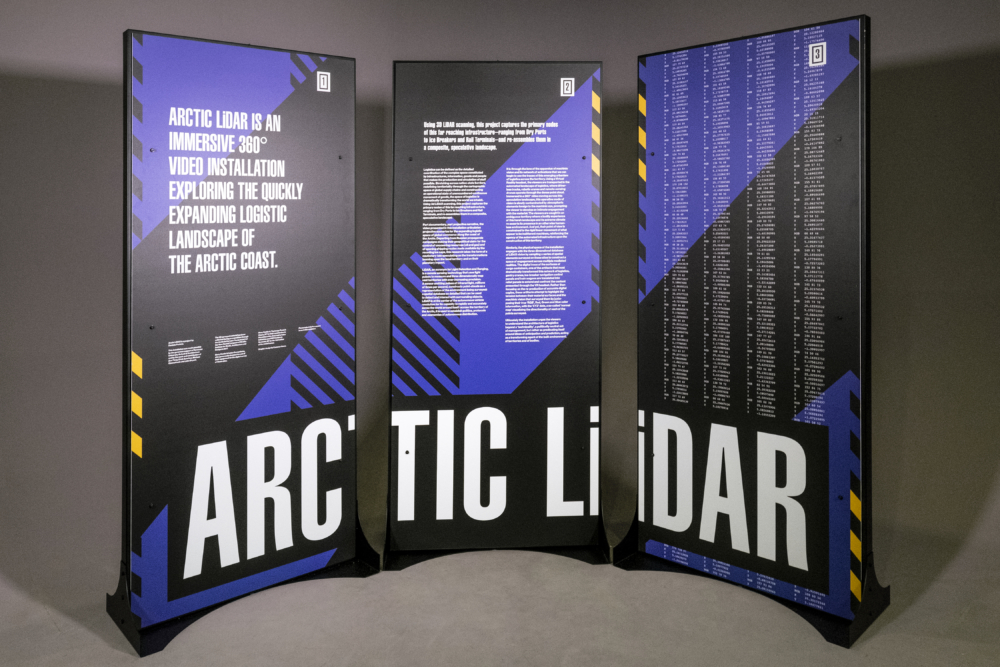 Overall photographs of the back-side of the freestanding panels showing the graphics utilized as a communication device to the general public. 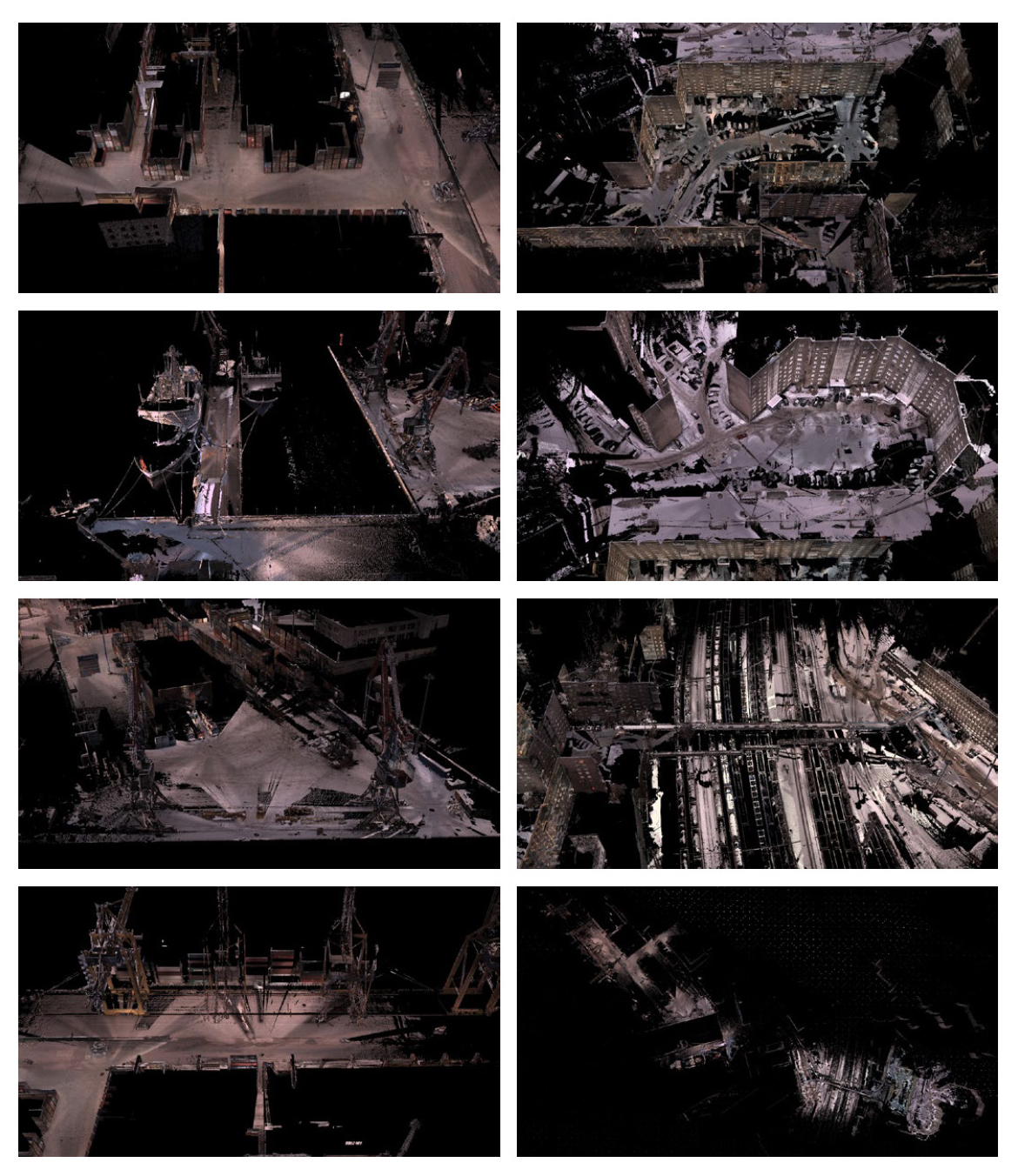 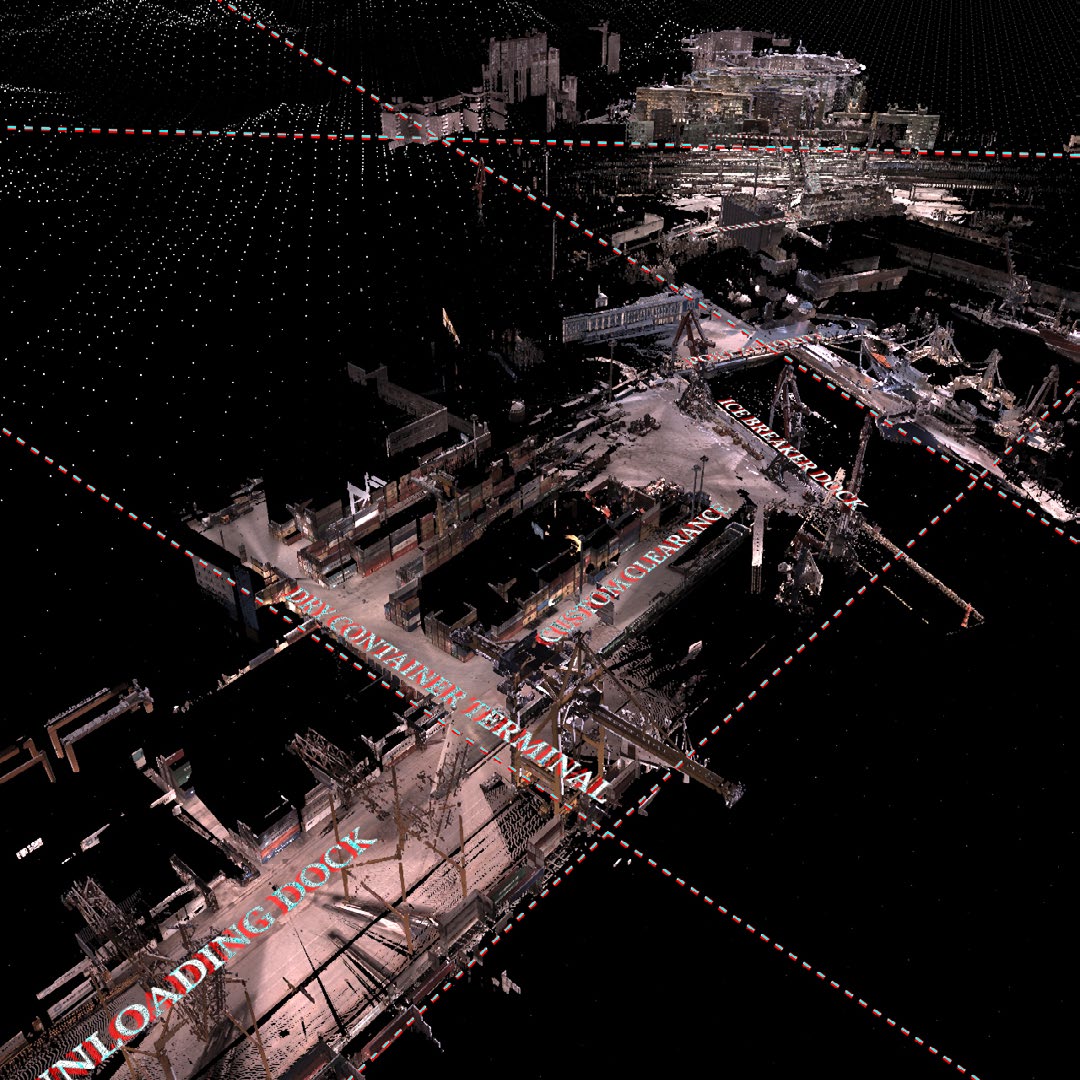 Aerial view of the composite landscape constructed from the different LiDAR Scans. The modularity of
these nodes reinforces the continuity of this infrastructure across a planetary scale.

Still from the 360o video displayed in the installation: here the scene shows the Dry Port Container Harbor area. The initial Scan data is infiltrated by atmospheric elements (in this case snow and lighting fog) to further reinforce a bodily experience of these sites. 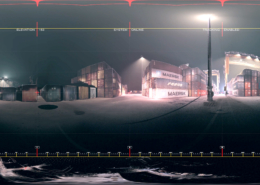 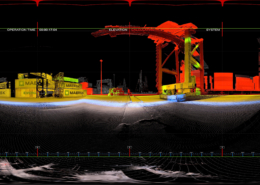 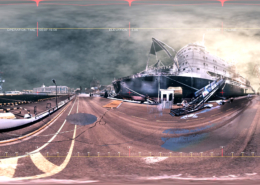 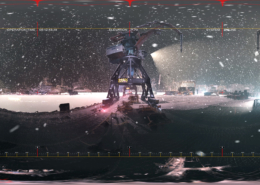 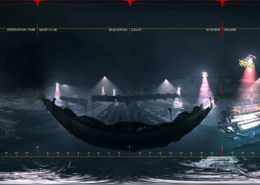 Similarly, the physical space of the installation engages with the three-dimensional database of LiDAR vision by sampling a series of spatial elements surveyed on these sites to construct a space of engagement across multiple mediated realities. The digital trace of the surfaces of cargo containers, one of the artifacts that most dramatically transformed this network of logistics, gantry cranes, ice-breaker navigation control panels and train wagons are translated into relief panels to extend and confront the content presented through the VR headset. Rather than focusing on the re-production of accurate digital copies, these artifacts attempt to highlight the tension between their material surfaces and the machinic vision that surveyed them by juxtaposing their true ‘RGB’, Red, Green and Blue color information, with the ‘XYZ’ data, a so-called ‘normal map’ visualizing the directionality of each of the points surveyed. Each panel is CNC milled out of high-density foam and is then printed with this edited texture layer.

Ultimately the installation urges the viewers to understand the architecture of logistics beyond a ‘technicality’, a politically neutral act of management, but rather predicates itself around ideas of anticipation and prediction, acting as a transforming agent of the built environment, of territories as well as of bodies. 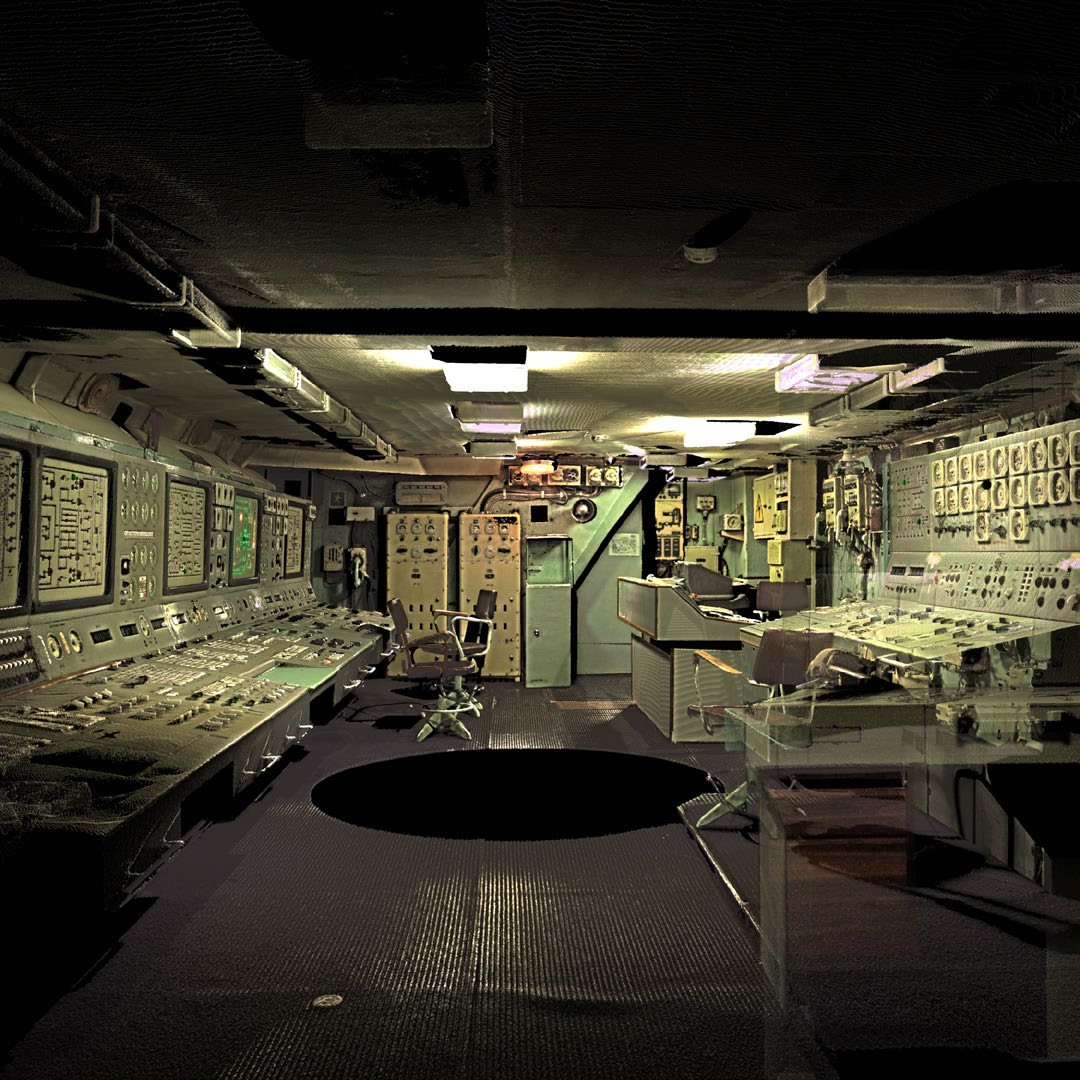 Still from the constructed digital scene showing the Control Room area of the Ice Breaker. The dense point
cloud here reads as a continuous image representing the interior of this space.