Graduate students from the Gerald D. Hines College of Architecture’s Graduate Design and Build Studio program will officially begin work for the Port Authority of Houston. 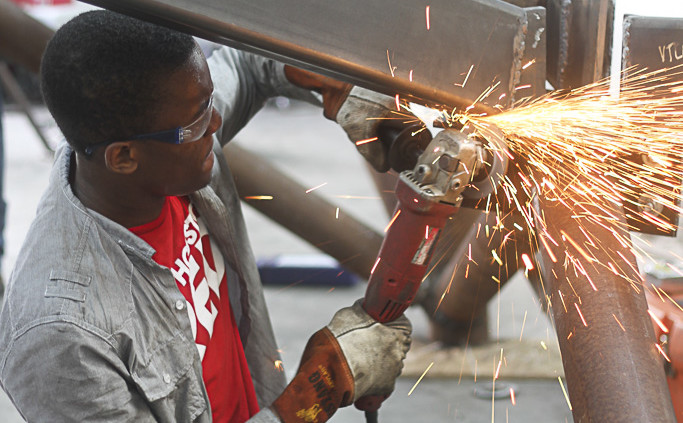 (Via The Daily Cougar)

The authority approved  plans for a $75,000 proposal to design and construct the entrance way  that will welcome visitors through its main gate by the 610 East Loop bridge over the Ship Channel.

“We are delighted to have the opportunity to work with such an exciting group and such an exciting location,” Graduate Design and Build Studio director and architecture professor Patrick Peters said.

The design ideas included a “shipgate” made out of a re-purposed vessel that could be used to block storm surges. Eriksson later met with students, architecture dean Patricia Oliver and other Port Authority members to discuss their involvement with the project.

“It’s an opportunity for two local institutions to work together and for us to learn about each other, and for students to make a mark on our facility,” Eriksson said in an interview with the Houston Chronicle. “We’re both public institutions, so in a way the public benefits from us collaborating at a reduced cost.”

The project aims to build an open shade structure for a security checkpoint where officers would check I.D.s. under the protection of a canopy.

“That exchange is currently happening in the open air,” Peters said. “At the bare minimum this project will allow that exchange to be done under a shelter. But at the same time, the opportunity architecturally, is to make that shelter mark the experience of entering into the port. So on the outside you’re basically in unsecured area, and once you pass through this exchange you’re in the first level of security.”

The students involved with the project will see it’s entire completion, from designs and construction drawings to actual construction. The final design will be presented for approval to the port on Feb. 10. By the summer students will work on building the structure themselves. The entire project is set to be completed by August.

“The benefit of this kind of exercise is they go through all those studies and steps but then they continue the process of full scale fabrication and construction on site, which ultimately gives them much more powerful feedback into their designs,” Peters said. “So they test the hypothesis of the design at full scale in the context of real world constraints.”

First year graduate student Andrew Rowell is one of the students involved with the project and said he is excited to work on such a large project.

“The design-build program in general is an invaluable resource and experience for architecture students,” Rowell said. “This hands-on experience is a fantastic opportunity to be a part of a legitimate project from start to finish, working with real-world professionals. I believe that anyone in any field would benefit from such a program tailored to their area of study.”

Most of the previous projects tackled by the program include open shade structures for parks and schools. This is the 27th year and project for the program.

“These projects are like crucibles,” Peters said. “Often students don’t know how they’ll rise to the occasion but it’s been proven for almost 30 years that students will be able to. The prospective gain from seeing that whole process from beginning to end is incredible confidence building and also incredibly powerful in the lessons it offers. A student has become exposed to the full range of professional skills and experience in that one exercise.”

(Read the full story at The Daily Cougar)