The design work of Clay Odom, an assistant professor in the School of Architecture at University of Texas in Austin, was recently displayed in Enghien-les-Bains as part of DATA CITY, a United Nations Educational, Scientific, and Cultural Organization (UNESCO) showcase displaying works of new media from cities with City of Media Arts designations in UNESCO’s Creative Cities Network. His project is a multimedia sculpture called “Flowering Phantasm” and stands 6 feet tall by 10 feet long and incorporates materials from around the world, including the city of Austin, TX. 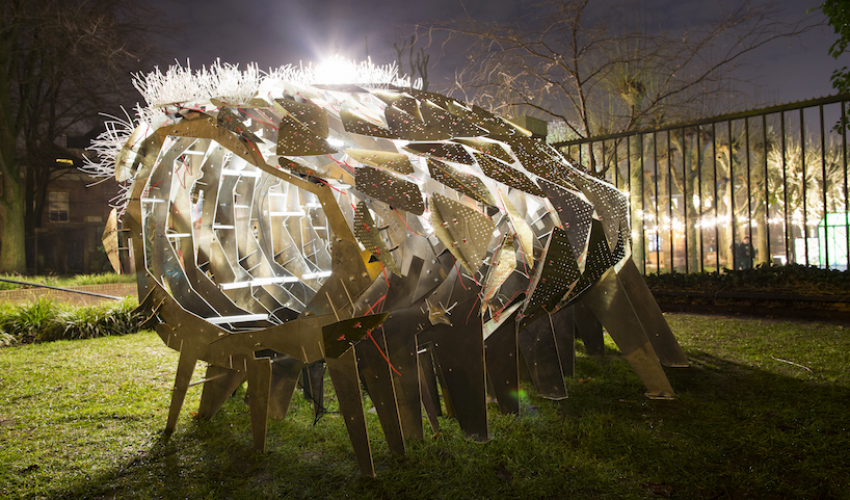 The gallery is intimate and dimly lit, its periphery a little unclear as one’s eyes adjust to the space. A low rumbling fills the room, the sound overlapping onto itself in a vaguely familiar, mechanical cadence. Or is it biological? The groan of a great beast or the sound of a distant jet engine? Rumblings of elephants, combined with the pulse of a fusion reactor? All of the above?

Just as enigmatic is the source of the cryptic melody: a tessellated, eggplant-shaped, glowing husk, lofted by an army of shiny, caterpillar-like fins that meet the ground at varying angles. Squatting over a pool of its own light, the roughly car-sized, biomorphic sculpture elegantly walks a tightrope between foreign and familiar, highly crafted and prosaic, approachable and aloof.

“Flowering Phantasm” is the brainchild of Clay Odom, assistant professor at The University of Texas at Austin School of Architecture and principal of StudioMODO. The installation has seen multiple iterations featured in global exhibits, to date, but the latest, “DATA CITY,” holds special significance, not only for the designer, but also for the City of Austin — as well as for the United States.

Each participating city holds the designation of a “City of Media Arts” by the United Nations Educational, Scientific, and Cultural Organization (UNESCO). Austin earned this designation in 2015 when the city was accepted into the UNESCO Creative Cities Network, and it continues to be the sole representative from the U.S. in its category.

Launched in 2004, the Creative Cities Network boasts 116 member cities representing 54 countries and covers seven creative fields: Crafts and Folk Art, Design, Film, Gastronomy, Literature, Music, and Media Arts. The stated agenda to “assert the role of culture as [an] enabler of sustainable development,” and Austin’s inclusion represents an opportunity to foster an exchange of ideals and media while also offering local artists a launchpad for global exposure.

“Austin is already a hub for innovation,” says Meghan Wells, manager of Austin’s Cultural Arts Division. “Whether it’s film, music, technology, video games, or art, this exhibition and future endeavors allow us to explore where our programming efforts overlap with other global cities.”

Wells is optimistic that, as momentum builds behind initiatives such as this one, Austin’s elevated profile will enable more opportunities to support local artists at home and abroad. Her office is especially focused on affordability issues that affect all residents, yet hit artists and people in other creative disciplines especially hard. The potential for international artist exchanges, worldwide visibility, and opportunities to contribute to a global dialogue between similarly aligned cities will, it is hoped, position Austin well, in this regard.

Flowering Phantasm is particularly well-suited to showcase Austin’s place at the intersection of art and technology. Its formal presence is not just evocative; there is a clear effort to celebrate the marriage between technology and experiential transcendence.

Its hollow interior reveals a layered assembly, starting with an interior structure of 3mm water jet cut aluminum fins which meet the ground and combine to give the piece its overall shape. These are bolted together via an egg crate system and assembled on site. Additionally, the frame supports a computer-controlled LED light array, several internal camera and projector elements, and two birdlike prosthetic video armatures that protrude from either side of the piece (according to Odom, their displays represent an evolutionary abstraction of vision).

Gold anodized perforated aluminum panels, which Odom calls “petals,” are fastened to the main structure with connecting feeders and simple, bright red zip ties. The perforations allow the petals to be penetrated by more than 3,000 feet of blinking, LED fiber “hairs” that blur the boundaries of the object when viewed at a distance. An earlier iteration showcased at the Amsterdam Light Festival also featured a series of inflating and deflating fabric bags supplied by Arduino — controlled blowers that allowed some petals to slowly undulate, as if they were breathing.

Despite its exposed mechanical heroics, the combined effect of the composition makes it hard to imagine that the piece isn’t, in some way, alive — or perhaps sentient.

Arguably, the success of Flowering Phantasm stems from its deft maneuvering between these contradictory realms. Likewise, as Austin’s cultural landscape continues to experience the inevitable growing pains of a booming city, city-led involvement in initiatives such as UNESCO’s Creative Cities Network will become an increasingly valuable resource to the local creative talent that has shaped Austin’s ethos for decades.

View a video of “Flowering Phantasm” on display at the Amsterdam Light Festival.

UTSOA Assistant Professor Clay Odom’s experiential sculpture, “Flowering Phantasm,” debuted at the Amsterdam Light Festival December 15, 2016 – January 8, 2017. This innovative work, composed of aluminum and fiber-optic LED trichomes, explores the systematic intertwining of light, form, and color, and responds to changes in daylight and the movements of viewers. It was selected for the festival out of more than 500 entries from 48 countries.

UNESCO Creative Cities
The UNESCO Creative Cities Network (UCCN) was created in 2004 to promote cooperation with and among cities that have identified creativity as a strategic factor for sustainable urban development. The 116 cities which currently make up this network work together towards a common objective: placing creativity and cultural industries at the heart of their development plans at the local level and cooperating actively at the international level.

Why I Studied Architecture: Noor Awad of UW
Scroll to top