SCI-Arc is pleased to present José Oubrerie’s Chapel of Mosquitoes architecture and paintings, opening February 3, 2017 in the SCI-Arc Library. 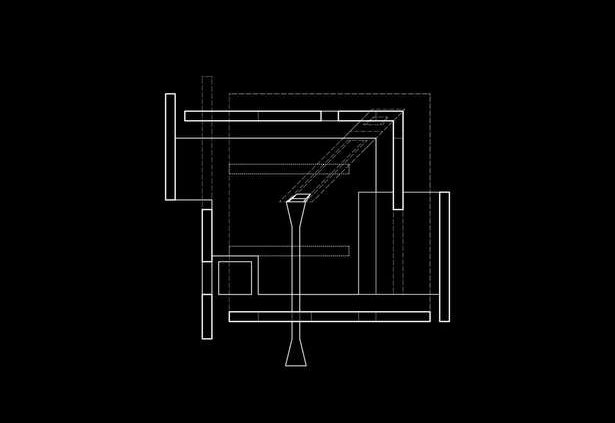 The Chapel of the Mosquitoes

LOS ANGELES, CA (January 9, 2017) – SCI-Arc is pleased to present José Oubrerie’s Chapel of Mosquitoes architecture and paintings, opening February 3, 2017 in the SCI-Arc Library. Oubrerie’s Chapel of Mosquitoes synthesizes the opposite spatial investigations of two of the architect’s most significant works: the 1986 French Cultural Center in Damascus and the 1992 Miller House in Lexington, Kentucky. The Chapel, planned for a site in upstate New York, becomes a contraction of these two projects yet retains attributes of both.

In the Chapel, the diagonal conduit that pierces roof and floor creates an axis between light and water and is reminiscent of the ladder in a kiva – the traditional community and meditative space of the Pueblo peoples in which the ladder not only allows access but also joins sky and earth. Yet, in the Chapel, there is no sipapu – the round hole of natural soil in the kiva’s pavement through which the spirits of the ancients can exude. Instead, the ground is visible beyond the floor, which retracts to allow the natural ground to enter the interior and also extends to integrate the interior space with the exterior.

The coexistence of interior and exterior, together with the sunlight and rainwater descending from the sky, reminds us of the elemental aspects of being human and that, for us, there is only ONE EARTH.

José Oubrerie is Professor Emeritus at the Knowlton School of Architecture at The Ohio State University, where he was Chair from 1991 to 1997.

Initially trained as a painter, Oubrerie studied architecture at the École des Beaux-Arts in Paris. In 1958, he joined the Atelier Le Corbusier, where he was involved in projects including the Strasbourg Convention Center, the Venice Hospital, and the church of St. Pierre de Firminy-Vert. After Corbusier’s death in 1965, he formed a brief partnership with Guillermo Jullian de la Fuente to complete design development of the Venice Hospital. In 1967, he launched Atelier José Oubrerie in Paris.

Oubrerie relocated to the United States in the early 1980’s and formed his current practice, Atelier Wylde-Oubrerie, in 1989. His many acclaimed projects include the French Cultural Center in Damascus, the Miller House in Lexington, Kentucky, and the completion of the Firminy Church in 2006.

Long celebrated for his contributions to architectural education, Oubrerie has taught at the Cooper Union, Columbia University, the University of Kentucky (where he was Dean from 1987 to 1991), and Ohio State. He is currently visiting professor at the University of Illinois at Chicago.

SCI-Arc exhibitions and public programs are made possible in part by a grant from the City of Los Angeles, Department of Cultural Affairs.