UW-Milwaukee students partnered with the theater department to research and do interviews of the oral histories of the Washington Park Neighborhood. 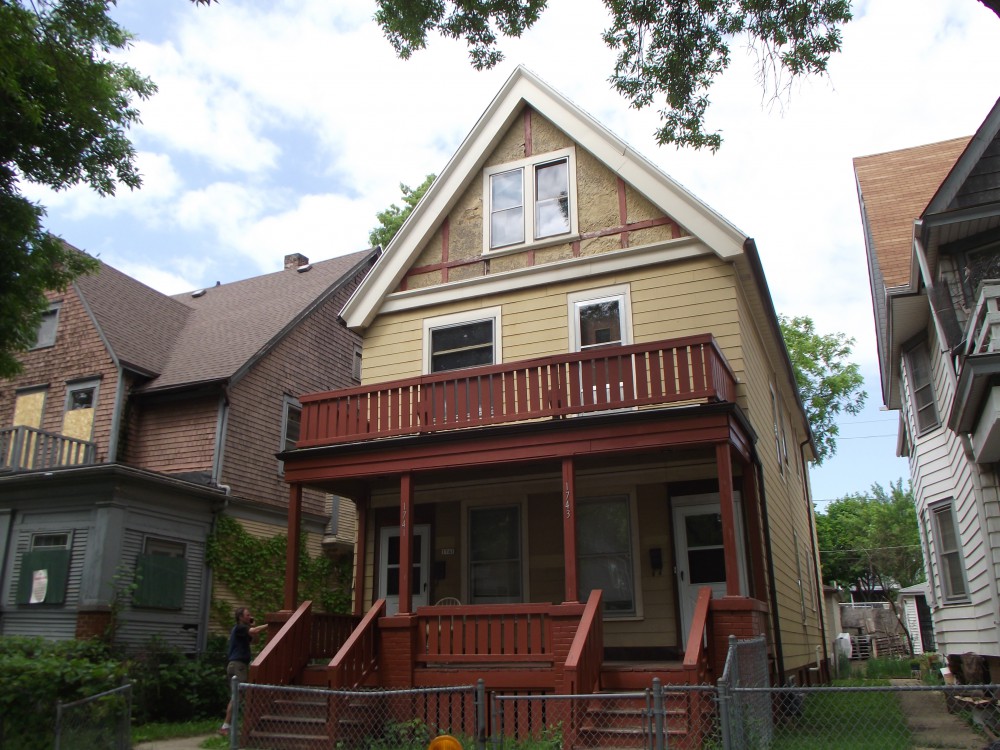 Some of the Washington Park neighborhood residents have lived there for three, four or five decades. One says both of her grandfathers lived there since before Milwaukee became a city. Others, including renters, are newer residents. They are all oral history participants who comment on family history, changes and challenges with the neighborhood, in a new docudrama created by UW-Milwaukee’s theater department and based on research and interviews by students in the School of Architecture and Urban Planning.

The area northwest of downtown gets so little attention that one character laments it’s often “grayed out” in online maps of the city, “like it doesn’t even exist.” This new and quite unique play, called “This is Washington Park. This is Milwaukee,” dramatizes the neighborhood’s existence and importance, and will be presented Wednesday through Sunday, October 12-16 at UWM’s Peck School of the Arts’ black-box theater. 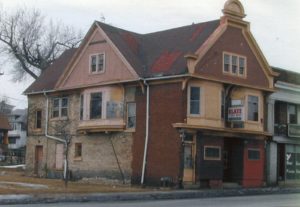 The play gives voice to “people who live in and care about” neighborhoods surrounding the 128-acre Washington Park. The official borders of the neighborhood are Vliet Street on the south and North Avenue on the north, between North 35th and U.S. 41, with Lisbon Avenue and Sherman Boulevard as bisectors. However, the play broadly celebrates all areas near the park, including Martin Drive, Walnut Hill and Washington Heights. 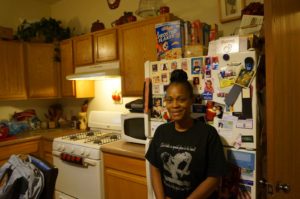 To that point, in the play resident Pat Mueller describes a strategy she has pursued: “A couple years ago I had this idea to rebrand it (the area) as the West Side instead of any single neighborhood. I started going to some of the neighborhood associations and explained why I felt we needed to rebrand ourselves as something bigger than any one of us…and why we needed to do this jointly because many people, if they’re not familiar with the area, sort of write it off…”

The play was created collaboratively by Alvaro Saar Rios, a UWM assistant professor of theater, with students in his Acting Topics classes. The 80-minute show includes monologues, ensemble scenes and songs. It’s based on research by students in the Buildings-Landscapes-Cultures (BLC) Field School,  within the School of Architecture and Urban Planning. Arijit Sen, a UWM associate professor of architecture and urban studies, began working with students to conduct oral histories with residents.

And Sen is one of the characters in the docudrama, who tells students: “Once you tell a story of a place, it’s hard to erase. This is why the work you are doing is very vital.” He elaborates: “Mainstream commentaries and media representations of the Washington Park area are woefully insufficient. Quantitative demographic numbers, property values, or more vulgarly, coarse statistical narratives of crime and revenue do not do justice to this area…Consider this project as a beginning of a conversation…exploring enduring values, themes, dreams and practices that capture the spirit of the neighborhoods of Washington Park.”

For each oral history, small teams of students met individually with residents in their homes and asked them to “share stories of how you use, remember and experience specific places.” Students also measured the participants’ homes and gathered other relevant data. Participants were also invited to share old family photographs showing activities and events in the neighborhood. Washington Park Partners and other community organizations sought out participants and arranged the meetings. The play cites neighbors who assisted with the project, some of whom are featured as characters: Muneer Bahaudeen, Dave Boucher, Rosalind Cox. Mike Howden, Pat Mueller and Tommy Vang.

Sen said in an email: “Researchers were undergrads, graduates and doctoral students from Architecture, Preservation, Art History, History, Social Work, Art Practice, Geography and Anthropology. I had students from California, North Dakota, Alabama, Canada, Brazil, China and other parts of Wisconsin, in addition to students and community members from Milwaukee.”

The play features 19 neighbors of diverse ages and backgrounds as well as the voices of the researchers. Students acknowledge their trepidation about going into an unfamiliar neighborhood, of leaving “the comfort zone of the classroom,” as well as what they learn in the process. As artist Bahaudeen reflects on meeting with researchers in his Lisbon Avenue studio: “Right now, I’m thankful because Arijit is helping us tell our story. That’s what we don’t get in the media.”

All participants were required to sign a release allowing their interviews and other information collected to be held under a Creative Commons license for future community members, scholars, students and researchers to use “for a scholarly article, a community publication, a project website or works of art.” Sen says no one they sought out declined to sign the release.

The oral histories are just one element of exhaustive research posted on the “Washington Park Stories” website. It includes histories of numerous buildings, streets and Washington Park (originally named West Park and master planned in 1891 by Frederick Law Olmsted, creator of Manhattan’s Central Park) dating back to late 19th century. The district originally was a German enclave. The students also researched past and present businesses, theaters, churches, schools, art spaces, green spaces and area nonprofits such as Habitat for Humanity, the Hmong American Friendship Association, and the Urban Ecology Center. The project explores the “many networks of relationships that connect” these people and places.

Stories of neighbors were incorporated verbatim, most using their full names. Saar Rios told Urban Milwaukee he intends to continue mining the oral histories—60 people have been interviewed–to further develop the docudrama. Numerous plays by Saar Rios have been produced nationwide, including at Milwaukee’s First Stage Theater.

Shortly after Saar Rios joined the UWM faculty three years ago, he met with Sen about the project and committed to developing a play. After sifting through hundreds of hours of transcripts, Saar Rios began working with his students to develop a structure and dramatic narrative in which actors portray multiple characters with minimal props and staging. Saar Rios also directed the production collaboratively with the cast. For example, several music theater majors created three musical numbers, including a snappy song to enliven the otherwise-dry text of the release form that’s included in the play.

Two years after coming to UWM in 2006, Sen co-founded a doctoral area of research with UW-Madison’s Department of Art History to encourage the study of cultural landscapes, including immigrant landscapes and urban public spaces–Sen’s areas of expertise. The Buildings-Landscapes-Cultures Field School evolved. Since 2012 it has become a permanent summer offering at UWM in collaboration with the public history program department, which now includes oral history and digital humanities methods.

“I have always been an outsider in my life,” Sen explains. “When I was growing up, I moved from one city to another. After moving from India to the U.S. in 1989, I have moved to multiple cities. That outsider’s point of view has produced in me a need to look at this world from multiple perspectives and often from the point of view of those whose voices and histories are not accounted for in history canons. Of course part of this methodology also comes from my training as a cultural landscape historian at UC Berkeley where I studied under Dell Upton and Paul Groth, leaders in the fields of Architecture and Cultural Landscape history. For instance, when we studied the Historic Water Tower homes we reexamined that landscape from the point of view of service providers, servants and stewards of the environment.”

In 2013 the BLC field school received the American Association of State and Local History merit award. In 2015 it became one of a few programs nationwide featured by the National Humanities Alliance as a “model program for cultivating vibrant local humanities communities” The program has also received multiple Wisconsin Humanities Council awards and funding from the Cultures and Communities Program at UWM, the David and Julia Uihlein Charitable Trust and the Wisconsin Preservation Trust.

The field school undertook a long-term, cross-sectional analysis of North Avenue, beginning in 2013 with a neighborhood-immersive study of the Historic Water Tower Neighborhood. The project moved to the other end of North Avenue (Washington Park) in 2014. Sen wrote in an email that the decision to stay in Washington Park for multiple years “emerged from a need to engage communities over time to look for mutually beneficial and productive collaboration and to avoid an unethical fly-in-and-fly-out mode of engagement.”

The field school has generated multiple partnerships. In fall 2014, it worked with Simone Ferro, a UWM dance professor and artist/Professor Jill Sebastian’s art class from Milwaukee Institute of Art and Design to start a Washington Park (Artists) Collaborative.  That initiative has led to dance events, main-stage productions, art walks and other projects.

In spring 2016 UWM professors Anne Bonds of Geography and Jenna Loyd of Public Health joined with their students to conduct more traditional research on issues in the neighborhood. The field school has also presented at roundtables and exhibits in Milwaukee’s City Hall and has collaborated with James Harris’s “Multicultural America” course in Urban Studies. The project embodies the concept of the Wisconsin Idea, an educational approach first explained by University of Wisconsin President Charles Van Hise in 1904 when he said he would “never be content until the beneficent influence of the university reaches every family in the state”.

The website notes that the Washington Park neighborhood “is not currently thriving and has nowhere near the levels of interaction and energy that it had in the last century.” It also presents UWM student proposals and designs for redeveloping the neighborhood. A page titled “A Changing Community” analyzes an abandoned church building, the former St. Thomas Aquinas Roman Catholic Church and a school that once belonged to the church. “It was discovered that there was once a very high population in this area that attended this school, and the church was a very tight-knit community.” Student researchers propose that “the empty church could be used again as a community center…restoring it as “a neighborhood landmark, both giving the residents something to feel proud of as well as a functional community building.”

The Washington Park play helps make this extensive research accessible to a general audience. It was originally presented last month in a free staged reading at the Urban Ecology Center in Washington Park. Many of those portrayed attended and participated in a post-reading discussion. A preview production was presented for attendees at the “Imagining America” national conference of “scholars and artists engaged in civic life” held in Milwaukee last week.

Performances will at 7:30 p.m. Wednesday through Saturday and Sunday at 2 p.m.at at Peck School of Arts at 1925 E. Kenilworth Pl. You can buy tickets online.

Interested in studying at UWM? Visit the University of Wisconsin-Milwaukee School of Architecture and Planning’s profile page.