Want a job when you graduate? Major in Architecture.

"Architecture had the highest rates of employment at 96%. Architecture majors were also the most likely to have a job secured before they graduated from college."

<
Blog
Careers
What To Know 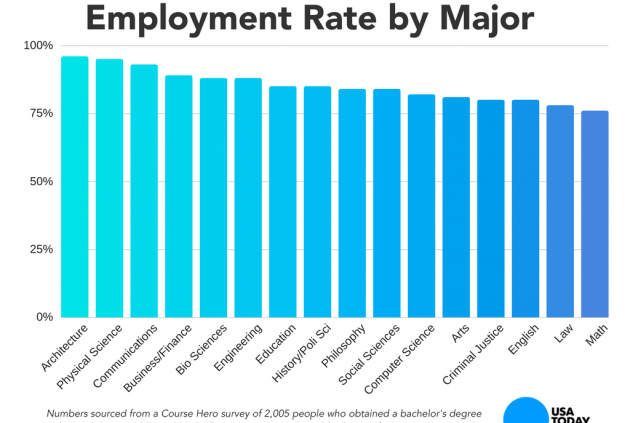 Until college graduation, students spend their whole lives preparing for one thing: a job.

Fortunately, unemployment among college graduates has been on the decline in the last decade, but many graduates still struggle to find well-paying jobs to start their new lives in the workforce.

College graduates with a bachelor’s degree or higher are currently facing an unemployment rate of only 2.4%, according to the U.S. Bureau of Labor Statistics. Compare that to the average unemployment rate of the working population of the U.S., which is almost twice that, at 4.4%  — clearly, getting a degree makes you more marketable.

But just how marketable is your specific degree? Well here’s what we can tell you — that English major is still going to make it difficult to find a job after college, but so will a math degree.

Of the 2,005 graduates polled in a Course Hero survey, 80% of those with an English degree were employed. Counterintuitively, only 76% of math majors were employed.

Architecture, physical or environmental sciences, and communications majors all had the highest rates of employment at 96%, 95%, and 93%, respectively. Architecture majors were also the most likely to have a job secured before they graduated from college.

Course Hero CEO Andrew Grauer hopes students will use the information in this survey to help them look toward the future and ask practical questions about choosing a major.

“Nobody can predict the future,” Grauer explained in an email to USA TODAY College. “It’s valuable for college students to think beyond what they enjoy studying today when they select a major and ask themselves questions such as, where could this area of study take me?”

The survey found just 16% of college graduates would choose the same major again. But for a graduate like Catherine Lanyon, despite a “stressful” job search, given the choice to do college all over again, she wouldn’t sacrifice her passion for practicality.

Lanyon, a 2017 graduate of Boston University who received a bachelor of science degree in English education, described her post graduation job search for a teaching position as stressful and frustrating.

“I knew that I would be paid little and that getting or keeping a job might become more complicated as society advances and expects more from educators,” Lanyon told USA TODAY College. “But I would not change my childhood dreams for anything.”

To Lanyon, the results of the Course Hero survey aren’t at all surprising. “Architects, enviro scientists, journalists and business people will be integral to shaping the future that we have access to. But — so will I.”