"We are focused on coming up with solutions for what we want to offer for education, people and the community." - Lopez 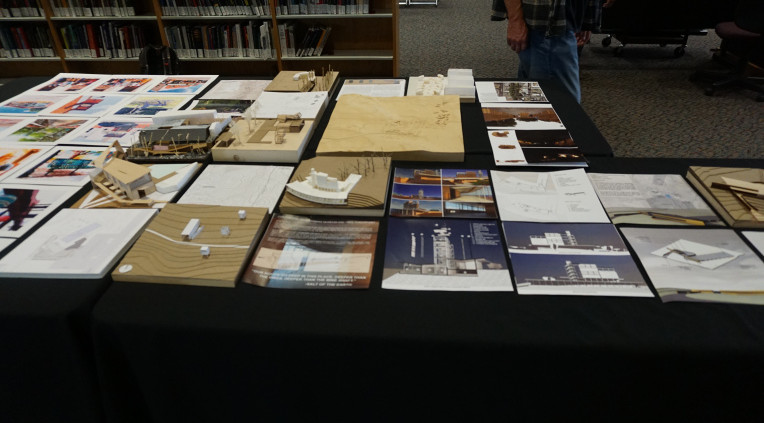 One set of speakers was from the Plata Studio, an effort merging students from Woodbury University’s Architecture School and from the University of New Mexico School of Architecture, using facilities at Western New Mexico University. This is the second year the students have spent in Silver City. Tim Castillo, who grew up in Grant County and went on to become an associate professor of architecture at UNM wanted to give back to the community that raised him, so he came up with the idea to help Silver City make some improvements, and asked his students to help and asked Woodbury students to join in the project.

Alex Rodriguez of Woodbury University said the group was in town just this week. “We got a lot of information last year. This year we wanted to take some more film footage. We are combining the students of film, photography and architecture to build a beneficial plan for Silver City and Grant County.”

Humbert Lopez, a student in the UNM School of Architecture, said it was exciting to be back. “We are focused on coming up with solutions for what we want to offer for education, people and the community. We call the project, ‘Create You,’ to have a makers’ lab for film-making, music-making and whatever ideas the community comes up with. We would like to use a food truck, with a makers’ lab inside.”

“It would be a mobile platform for the community to engage in,” Lopez said. “We want to make it engaging to the public. Because it will be mobile, it can plant anywhere in the city or county.”

Rodriguez said the idea of Create You came because of the art community in Silver City. “You have a lot of makers and tinkerers.”

Kel Cruz, studying film at UNM, said the group was not in Silver City to impose anything on anyone.

“Our proposition is the makers’ lab,” Rodriguez said. “We want to introduce the new lab and let people try it out. We want to teach teachers to hold workshops for kids. There are plenty more options.”

Because it would be a mobile platform for fabrication, the plan is to introduce to people 3-D printing and laser cutters, and how people can put them to work.

“We envision a partnership with the schools to set up a hub for workshops, for doing internships, say a teacher who can then teach her students,” Rodriguez continued.

To learn more about the program at University of New Mexico, check out their profile page on StudyArchitecture.com!

Interested in Woodbury University? Check out their profile page!

Buildings that Grow, Breathe and Burn Calories
Scroll to top